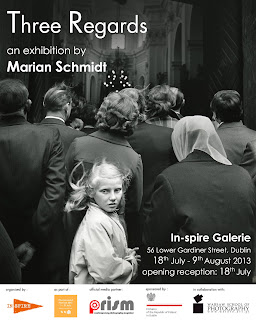 We kindly invite all to "Three Regards", an exhibition of Marian Schmidt as part of PhotoIreland 2013.

Marian Schmidt was born in Poland in 1945. He spent his childhood in Venezuela. At the age of 12, while studying at the Liceo de Aplicación in Caracas, he began to take photographs with his father’s rangefinder Konica and make documentary films with his Canon 8mm film camera.

Inspired by the films of Ingmar Bergman, he decided to become a film director and wanted to study filmmaking in Los Angeles.  However, his father would not finance his plans and instead sent him in 1961 to the University of California, Berkeley to study engineering. His professors discovered he had a great talent for mathematics and a year later he transferred to the mathematics department where he obtained a B.A. with honours in 1965. He accepted  a generous scholarship for Ph.D. studies in mathematics from Brandeis University in Waltham (Massachusetts). In his first year at Brandeis he was lucky to meet the great mathematician John Forbes Nash Jr (“A Beautiful Mind”), whom he befriended and admired. During his studies, he returned to his adolescent passions and began photographing again.  Artist Ben Shahn after viewing one of his first pictures encouraged him to continue photographing. Schmidt also made an experimental film with the recently acquired cinema equipment by the university.


The summer of 1968 was a turning point in the life of Marian Schmidt. During a stay in California, he began reading the novels of Hermann Hesse and the writings of Jiddu Krishnamurti. He had an out-of-body experience and went through several peak experiences as described by psychologist Abraham Maslow. He became aware that he was much more attracted by a spiritual dimension than by  intellectual creativity. He decided he would not become a mathematician, but rather a film director and photographer. He also realized that transcendence is the most important content in any creative work. Finishing his Ph.D. thesis became a must for him. He did not want to repeatedly question himself for the rest of his life on whether or not he could do it. Upon his return to Brandeis, he found out that Abraham Maslow, the head of the psychology department, had invited J. Krisnamurti for a series of  lectures. Schmidt had the opportunity to meet and speak with Krishnamurti. The following year he completed his Ph.D. thesis and was offered post-doctoral fellowships at Harvard University and at Princeton’s Institute of Advanced Study. At the same time Krishnamurti invited him to stay with him at Brockwood Park in England and teach there. He accepted Krishnamurti’s invitation and resigned from a research and academic career in mathematics. He travelled to Brockwood at the beginning of June 1969 where he spent a month with Krishnamurti and joined him in Switzerland in July. It was one of his most imporant living experiences. Next he went to Rome where he spent a few months taking photographs. Finding out that there was a conflict in the administration of Brockwood Park, he resigned from his teaching position. He was fortunate to meet Federico Fellini and Michelangelo Antonioni in Rome. Thanks to a recommendation of Antonioni, he obtained a job in New York City as assistant producer in the film “Steppenwolf” based on Hermann Hesse’s novel.  After a few months, the producers run out of finances and Schmidt lost his job. He spent the next five years in New York City working as a photographer (e.g. Santana’s cover photograph for the album Abraxas), lighting director in an Off-Off-Broadway theater and teaching in colleges.  He wrote and directed a fiction 30 minute film “The Daughter” which was shown at the Chicago International Film Festival and on Danish Television. During the summers he travelled to Mexico and to several countries in Western Europe taking photographs. Two of his Mexican photographs were chosen by André Kertész for an exhibition of young members of the American Society of Media Photographers.

During the summer of 1974 he visited for the first time his native Poland. Besides travelling in the country taking photographs, he met in Warsaw and Cracow some of the leading Polish film ad theater directors: Andrzej Wajda, Jerzy Kawalerowicz, Krzysztof Zanussi, Jerzy Hoffman, Konrad Swinarski and Jerzy Jarocki. Kawalerowicz invited him to return to Poland and work as assistant director in his film unit “Kadr.” In 1975 he settled in Poland where he lived for three years. He worked as assistant director in three feature length films. The most important being Kawalerowicz’s “Death of a President” (Silver Bear at the 1978 Berlin Film Festival), where he was first assistant director. In between films, Schmidt travelled extensively in Poland photographing every day life and important social, cultural and religious events. In 1976 he married actress Marta Dutkiewicz. His photographs were published regularly in several leading Polish magazines. In 1978 he returned to New York with his wife. Thanks to his photographs taken in Poland, he became a member of the prestigious photo agency “Black Star.”

In 1980 he moved to Paris to work with the photo agency “Rapho” joining the great trio of humanist photographers: Edouard Boubat, Robert Doisneau and Willy Ronis. Three years later his son Arthur was born. In 1986 he began to fulfill one of his childhood dreams: learning to play an instrument. He took lessons in playing the traverse flute with Marc Beaucoudray and Ivan Bellocq. Several years later he was flutist of “L’orchestre de flûtes du Val-de-Marne.”  From 1998 to 1990 he studied phenomenology of music in Cluny and Paris with the great conductor and musician Sergiu Celibidache. The seminars with Celibidache confirmed Schmidt’s approach to artistic creation and changed his way of listening to music transforming it as a form of meditation. Celibidache inspired him to create his own phenomenology of the image which became the basis of his teaching photography. Until now, he has been constantly developing and refining it as a didactic tool.

In 1990 Editions Hermann published in Paris Schmidt’s first book: “Hommes de science” 28 portraits and interviews with the greatest French scientists. President François Mitterrand inaugurated his photo exhibit with the portraits in the book. Henri Cartier-Bresson sent a letter to Schmidt congratulating him for the portraits.

In 1994 Editions Cercle d’art published in Paris an album of Marian Schmidt’s photographs with an introduction written by Edouad Boubat. Before the publication, when Boubat saw his photographs for the first time, he told Schmidt: “You are one of us.”

The year 1997 was another turning point in his life. He left France and settled down in Warsaw together with his family. He was invited to teach photography as a visiting professor at the Academy of Fine Arts (now the University of Arts) in Poznan. He also taught at the Polish National Film, Television and Theater School in Łódź where he obtained in 2002 the degree of Habilitated Doctor of Film Art in Artistic Photography.

For Marian Schmidt photography is a search for hidden treasures. He prepares himself psychologically to get rid of tensions, achieve a certain inner peace and feel inspired. He goes with open eyes and an open heart on promenades in streets, parks, cemeteries, countryside, forests, and landscapes. There is a paradox in this search, which makes it an act of active meditation. There is a purpose in it and at the same time it’s purposeless. He looks for something, but he doesn’t have to find anything. The bliss is in looking or finding. Sometimes it happens that he feels a strong emotion while photographing a subject, and later he finds out that the emotion is absent from the photograph. It doesn’t matter. Even if the image is discarded, the living experience rests and no one can take it away from the photographer.

“What we have sensed here as beauty Someday will come to us as truth” – Schiller.