prism is thrilled to invite you all to the exhibition by Michal Luczak entitled "Brutal Retrospective" to be held in Doomed Gallery London from 5th to 8th November 2015. As much as we are excited to media partnership on this exhibition we are happy to announce we will also be able to share a detailed insight on Michal's work in the upcoming #22 Q4/2015 issue of prism to be launched mid November. 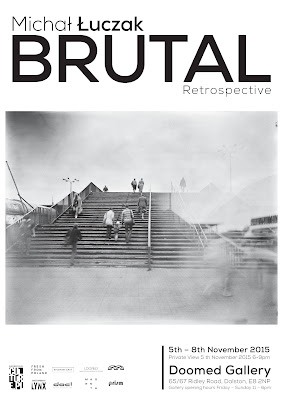 About BRUTAL: Katowice Railway Station, constructed in 1972, was a high-standard building. Raw, concrete constructions were at the time a symbol of modernity and prosperity of Polish People’s Republic. Only a decade later neglected building began to fall into ruins. Even 22 years of independent Poland didn’t help and the condition of the building continued to fall. Nobody felt responsible for it.

The ruin in the city centre of the biggest, post-industrial coal-mining district in the country started to live its own life. On one hand it was still a place where people get on and off the train but on the other it became an area of uncommon "passengers" who didn't have any tickets and never got on any train.

Hanging around with an old-fashioned Graflex author unintentionally became one of those who  were not travelling from A to B. The people started asking him questions. Mostly they were asking for money to get a drink or food but sometimes also to be photographed. As he says they were the ones who created in there some kind of a parallel world which existed on the sidelines of normal life.


Finally the Station was destroyed at the beginning of 2011 and the people he met also disappeared. Now a modern glass-and-steel shopping mall with a space for train passengers was constructed in its place. It was the last significant example of brutalist architecture in Poland.

Exhibition theme is related to work with the archives. It aims to recreate picture of the place which does not exist in a real world anymore. The main components of the exhibition are: photographs, photobook, related text and architectural plans. The foundation for the whole concept here is the photography; taken out of author’s context, in relation to documentary role of the medium. Contrary to the book, where narration of the story takes the first place, photographs work as a “proof of existence” for particular places and characters. Construction of the photography carries similarities with the character of human’ memory: gaps in between particular parts and associational perception of the medium. Related architectonical text, from the period of the formation of the building, gives more detailed description of its functionality, arrangements of the space and specific parameters. It also explains the origins of the whole construction. The theoretical argumentation hasn’t been yet confirmed throughout the practical use, at the time. Reproductions of the original architectural drawings depict primary plans of the building.